In July 2017, FanFair Alliance published research to show how Viagogo, StubHub and Get Me In! could be misleading live music audiences through their use of pay-per-click Google advertising. 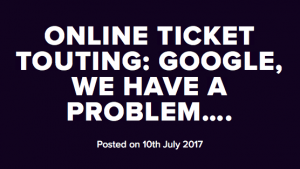 By paying to dominate search results for live music events – even when those events were not sold out – we felt so-called secondary ticketing sites were sowing confusion and directing would-be ticket buyers away from authorised sellers.

According to Which? research, almost half of purchasers from secondary ticketing sites believed they were buying from the authorised ticket agent.

In the interim period, and following campaigning by FanFair Alliance, we have seen major progress to reform the ticket resale market, including:

– Google’s launch of a global certification policy for ticket resellers

As a result of these actions, and under the pressure of sanctions, secondary websites belonging to Ticketmaster (Get Me In! & Seatwave) and eBay (StubHub) are showing greater compliance with UK consumer law.

And under pressure from Google, all secondary websites – including Viagogo – have added disclosures to their homepages, making clear that they are not the primary seller of tickets.

However, despite these forward steps, we continue to see the biggest secondary sites mislead and misdirect would-be ticket buyers through their employment of pay-per-click Google advertising.

This is particularly concerning in relation to Viagogo, which remains the most dominant ticket site on Google – despite operating in breach of UK consumer law. 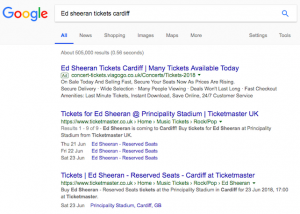 To highlight this continuing problem, FanFair Alliance has this month repeated our earlier research – searching on Google for tickets at a random selection of 100 live music events in the UK, including Ed Sheeran, Roger Waters, Justin Timberlake, the Rolling Stones, Superorganism, the BBC Proms, Wiz Khalifa, Tony Hadley and Krept & Konan.

Crucially, none of these events were sold out.

However, despite the availability of face value tickets, we found on 98% of occasions that either Viagogo, StubHub or Get Me In! were still paying to top Google search – and without any obvious disclosure that they were listing “second hand” tickets.

– Viagogo topped Google results on 52 occasions, and were in the top two results on 80 occasions.

– StubHub topped Google results on 41 occasions, and were in the top two results on 58 occasions.

– Get Me In! topped Google results on 5 occasions, and were in the top two results on 19 occasions. 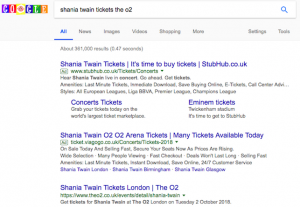 For FanFair Alliance, this raises three questions that we believe need to be urgently addressed.

1. WHY ARE GOOGLE CONTINUING TO ALLOW A LAW-BREAKING COMPANY – VIAGOGO – TO PURCHASE PAY-PER-CLICK ADVERTISING?

Viagogo are operating in breach of both UK consumer law and an ASA ruling on misleading pricing. There is overwhelming evidence of Viagogo’s negative impacts on both audiences and artists. For Google to continue profiting from a law-breaking enterprise seems untenable.

2.WHY ARE SECONDARY PLATFORMS STILL NOT MAKING CLEAR DISCLOSURE THAT THEY ARE “RESALE SITES” IN THEIR SEARCH ADVERTISING?

Google’s ticket resale guidelines have brought greater market transparency, but they could be more effective. At present, secondary sites are required to make a disclosure on their website – but not, crucially, in their actual advertising. If it is not clear from their search adverts that Viagogo, StubHub and Get Me In! are listing secondhand tickets. And when situated at the top of search results, a strong implication remains that these are primary agents. 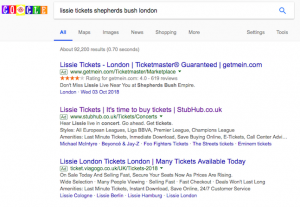 3. WHY ARE TICKETMASTER & STUBHUB NEEDLESSLY ENCOURAGING FANS TOWARDS TOUTED TICKETS?

Our findings highlight numerous examples of Ticketmaster prioritising Get Me In! on Google search when face value tickets are available at Ticketmaster-controlled box offices. Similarly, we see StubHub systematically directing consumers towards touted tickets when their venue partners – such as The O2 and The SSE Arena, Wembley – still have face value inventory.

“Reforms of the UK’s ticket resale market continue to be hindered by the misleading marketing practices of the largest secondary sites. Their deployment of pay-per-click search advertising prioritises ticket touts before ticket buyers.

“These bad practices could easily be cleaned up by actions from three US-based corporations.

“Firstly, Google. We have a situation where one of the world’s most trusted brands is providing life support to one of the worst. Viagogo is a company that systematically breaks UK consumer protection laws, that ignores ASA rulings, that undermines the UK’s creative economy and causes harm to UK consumers. When even the Culture Minister is advocating a boycott, then surely it’s time for Google to permanently remove this law-breaking site from its advertising networks?

“And secondly, we need Ticketmaster and StubHub to seriously up their game. Both have the wherewithal to act with greater transparency, to make clear in their search advertising that they operate resale platforms, and to stop misdirecting fans away from face value tickets at either their own or their partners’ box offices.

“None of this is rocket science. None of it should require regulatory intervention. Just simple and sensible changes, that would benefit consumers and make it easier for them to buy a ticket.”

Sharon Hodgson MP, Member of Parliament for Washington and Sunderland West and Chair of the APPG on Ticket Abuse said:

“Further research from FanFair Alliance has confirmed what we already knew – secondary ticket sites such as Viagogo, StubHub and GetMeIn! use misleading pay per click ads from Google to direct consumers to their websites, even though tickets are still available at face value on primary ticket websites.

“As the Chair of the All-Party Parliamentary Group on Ticket Abuse, I am very concerned by Google’s relationship with secondary ticket sites, the platform it provides for them and the priority it gives over primary sites.

“I believe that it is time for Google to cut its ties with these sites which so clearly break UK consumer law and watchdog rulings. This is something that I will be raising with the Government imminently.”

“A simple change by Google could give consumers the transparency they need to ensure they are purchasing a valid ticket to an event from a trusted source.

“The government is determined to help the industry clean up its act and it’s about time Google came to the table.”