New FanFair Alliance research highlights the extent to which so-called secondary ticketing platforms such as Viagogo, StubHub and Get Me In! could be misleading would-be ticket buyers through their online marketing practices on Google and other search engines – paying to top search results with tickets listed by touts, when face value tickets from authorised sellers are widely available.

Investigating ticket sales for 100 upcoming UK tours – by artists ranging from Metallica and Cliff Richard to Lulu and Run The Jewels – FanFair discovered that a secondary ticketing website had paid to top Google rankings on 77% of occasions.

On its own, controversial ticket resale platform Viagogo topped search rankings 65 times for these 100 tours – presenting itself on Google as an “Official Site”. 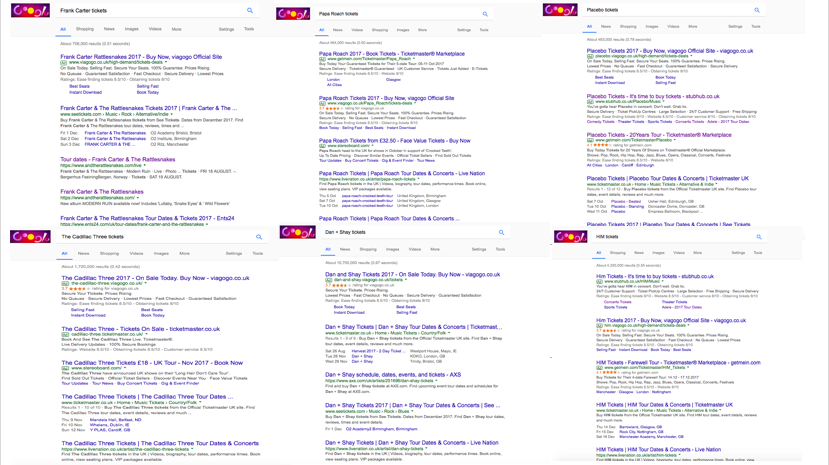 In March 2017, Viagogo’s executives failed to attend a CMS Select Committee evidence session into ticket abuse. On the basis of evidence heard that day, Committee member, Nigel Huddleston MP, described Viagogo as “the most psychologically manipulative website I have ever seen”.

Despite secondary ticketing platforms’ domination of search results, FanFair found that only 6 of these 100 tours were genuinely sold out – with the vast majority still having face value tickets available from authorised primary sellers.

“This is a real problem for UK audiences. If you’re looking to attend a gig or festival, you’d probably expect a search engine to act as a trusted guide and direct you to the legitimate ticket seller. However, we consistently see secondary ticketing platforms, led by Viagogo, using paid search to dominate search rankings and even masquerade as “official” sellers – causing considerable confusion in the process. FanFair is contacted on a daily basis by consumers who have been duped by this kind of advertising and led straight into the arms of a ticket tout.”

Other key findings of the research include:

– Viagogo’s practice of prominently placing artists names in their URLs – for instance:

– The increased prominence of bogus price comparison websites in paid search – such as Safe Tickets & Compare Tickets – which frequently default straight to Viagogo.

Of these 33 events – of which, again, only 6 were sold out – a secondary site had paid to top Google search on 17 occasions. Secondary sites were among the top 2 search results on 91% of occasions.

According to FanFair, it is the high service fees charged by Viagogo and other secondary platforms that allows them to dominate online search in this way.

“The reason that Viagogo and other secondary sites can manipulate Google search in this way is simple – it’s because they can afford to. Their business model is practically risk free and their service fees are typically set at around 20%-30% of the resale price. As a result, when purchasing AdWords they can outbid authorised ticket sellers whose charges are significantly less.

“FanFair has brought these practices to the attention of regulators and Google itself, but until action is taken we strongly recommend that would-be ticket buyers give search engines a swerve and check first with the artist or festival website.”

This can be downloaded here.