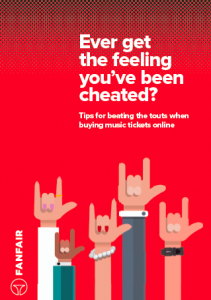 FanFair Alliance has today published a new online guide offering audiences Ten Tips to successfully navigate the ticket buying process, and to reduce the risk of being ripped off by touts.

This includes key information about authorised ticket sellers, about the importance of research – do not trust search engine results! – and greater awareness of the marketing practices employed by the so-called secondary ticketing websites.

Please download a free copy by clicking the image opposite.

The guide has won widespread backing from across the music business, and from the artist community in particular.

Ed Sheeran: “It’s important to get educated about ticket touts. Read the advice in the FanFair Alliance Guide – find out who the authorised ticket sellers are, avoid the secondary sites…and if you’ve got to sell a ticket, sell if for face value.”

Royal Blood: “We want our fans to have a fair opportunity to buy tickets at face value. We applaud the work of The Fan Fair Alliance in their efforts to bring greater transparency to the murky world of ticket touting”

Ed O’Brien (Radiohead): “The sheer scale of online ticket touting is a major problem for the live music business: artists know it and audiences at the sharp end certainly do. I fully support the FanFair Alliance campaign to raise awareness around so-called secondary ticketing and to help stop people getting ripped off.”

Mumford & Sons: “Read these ten simple tips and always go to the artist’s website if you want to know the best place to buy your tickets in the future”

Amy Macdonald: “Ticket touting is something I feel very strongly about, and I think it’s really important that people are made aware that some ticket resale services that seem legitimate are actually taking advantage of fans. I’ve implemented ticket naming on my UK tour dates in an attempt to make sure the tickets go to real fans and not touting services, and would urge anyone who finds themselves being unable to make it to a show to resell their tickets at face value to other fans, using a service like Twickets.”

Josh Franceschi (You Me At Six): “For us it’s about transparency and respect between the artist and their fans. With the secondary market in place, there becomes an element of distortion and mistrust which doesn’t sit well with us. I was determined to be part of positive change and to be look out for the fans of live music who have given us everything we have today.”

Mark Knopfler: “The FanFair Alliance Guide offers common sense advice to ticket buyers and the more widely it is adopted, the better it will be for fans and performers. Nobody wants the front ten rows of their event to be full of super rich consumers who may or may not actually be into the music as opposed to just attending the event.”

Launched in July 2016, the FanFair Alliance is supported by a broad coalition of the music business, with more than 100 music managers, live agents, concert promoters, ticket agents and trade bodies signing our Declaration Against Online Ticket Touts.

The campaign has consistently called for existing consumer law to be enforced and, where appropriate, expanded – and for greater transparency in secondary ticketing. The system of resale promoted by Get Me In!, Seatwave, StubHub and Viagogo has resulted in arguably the only online marketplace where buyers are not provided with information about the identify of sellers.

FanFair has welcomed recent announcements by the Competition & Markets Authority and by Government to further investigate the ticket resale market and to crack down on large-scale ticket touts.

We also support current amendments tabled in the Digital Economy Bill that would make secondary ticketing sites  provide greater information – including the original booking reference – when a ticket is listed for resale.